I'm going to get right to the point and try to keep this an easy read. Combination meters (odometers) that stop at 299,999 miles are annoying. The practical reason is because it makes it difficult to keep up with maintenance and if your Prius has over 300K routine maintenance is extremely important. The less practical reason (at least for me) is that you don't get the satisfaction of seeing how many miles your car has on it once you pass 300 K.

So who is affected?
This one is actually very straight forward. Toyota used two different combination meters on the Gen 2 Prius. The first style (I'll just call this the old style) was used on 2004-2005 model cars. Every 2006 or newer should have the new style combo meter. The major differences are that the fuel/odometer/PRND all switched sides and the READY light got relocated off of the meter on the new style. Here's a picture of both:


If you have an old style meter in your 04-05 Prius it will stop at 299,999. That's really all there is to it. We have tried to reprogram the old meters past 300,000. The memory takes and stores the new value but the processor will not display it. If you have a new style meter your good.

I don't like really long posts so I'm going to break this into a few. Stand by for more.

If your meter stopped at 300 K what are your options?

- If your staying with your old style of meter the only thing you can do is role the mileage back so that you can keep track of maintenance. You can do this by finding a meter from another car and putting it in your Prius or we can re program your odometer for you. Of course it becomes your responsibility to disclose the change if you ever sell the car.

- This brings us to our next point, Can a new style meter replace an old style meter? Toyota would say no. But actually you can.

We set out to find out if this would work, we took a 2005 Prius with 329,000 miles and a combination meter that had been stuck at 300K for over a year.
We then took a new style combo meter and programmed it to the cars actual mileage and put it in. It seemed that we were almost done but as soon as we plugged everything in the ABS light came on. That's weird.
Then when the car was turned on there were other lights on that made no sense. So we went for a drive.
As it turns out all of the wrong lights were coming on.

Here's a list of all the things that were not working properly:
-No right blinker
-A/C Auto button didn't turn any lights on
-No READY light
-Cabin Air Recirc button turns on the MAINT REQU light
-Front defrost turns the CRUISE control light on
-Rear defrost turns Icy Road light on
And
-When you turn the headlights on the rear defrost light comes on

Other than that everything worked great.

- So we took the dash out for the 5th time. Here you can see that there are 2 ribbon cables that go from the meter down to the light clusters on the left and right.
We went ahead and removed the right hand cluster and laid it out to compare it to one of the newer style clusters.
Here they are. Notice the newer cluster on top has the READY light which is not present on the older style. Time to put the new cluster in the car and see if it works.
Yes, everything works perfectly, we have a READY light, the blinker works, and all of the buttons turn on the right lights. Everything looks great except for that TPMS light. What's that about? This car doesn't have a TPMS system, come to think of it I don't think any of the 04-05 Prius had TPMS systems. Time to take it out again.
Yup there you go, the old cluster doesn't have a TPMS light. I didn't catch that when we swapped it earlier.
Omhoog

"In terms of practicality, there is no more rational car on Earth than the Prius." Dan Neil
Omhoog 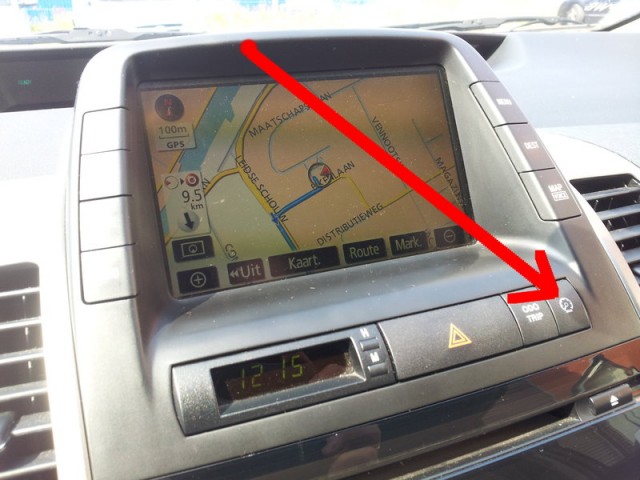